The Next Important Book You’ll Read

My dear friend Hanne Blank has written an extraordinary history and analysis of virginity. I’ve had the great honor of reading bits of it as she was writing, and I can tell you firsthand that this thing truly takes no prisoners–it’s smart and unsparing (as well as being highly readable and sometimes rather amusing) and is going to wind up making quite a mark. There aren’t a lot of books I want to buy for large numbers of the people that I know, but this is one of them.

I also happen to know that some big reviews are slated to come out in the next few weeks, so I thought I’d do my shameless promotion now, while the buzz is fresh. 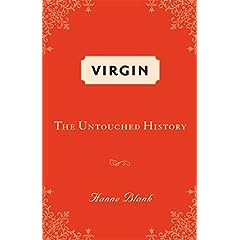 Here’s the starred review Virgin got in Publisher’s Weekly:

By any material reckoning, virginity does not exist,” writes Blank in this informative, funny and provocative analysis of one of the most elusiveâ€”and prizedâ€”qualities of human sexuality. Blank, an independent scholar, has pieced together a history of how humans have constructed the idea of virginity (almost always female and heterosexual) and engineered its uses to suit cultural and political forces. Blank has no shortage of fascinating facts: since Western virginity was symbolized by the color white, missionaries viewed nonwhite peoples as sexually immoral; late medieval and Renaissance moralists thought they could detect whether a woman was a virgin by examining her urine (“a virgin’s was clear, sparkling, and thin”). Blank also has a pleasing, highly readable style that allows her to convey large amounts of information with wit and agility. But she becomes most animated, and political, when she probes contemporary ideas about virginity. Taking on a range of questionsâ€”why is virginity considered sexy? how does the idea of virginity fuel violence against women?â€”she makes the case that contemporary culture is as obsessed with, and benighted about, virginity, as those of the past. Thoroughly researched, carefully argued and written with a sly sense of humor, this is a bright addition to the popular literature of women’s and cultural studies.

The book even has its own blog, with lots of commentary about virginity-related issues in the contemporary world (think honor killings, abstinence education, Virgin Mary citings, etc)–go here to read. But get the book, for pete’s sake. You’ll thank me for it.