We set out yesterday on the Big Grand Adventure of Driving Really Far, aka taking our time relocating from the uttermost west (LA) to the slightly further east (Boston).

We started off the day late–we had to load up the car, do the walkthrough with our landlord, run a few errands and the like. Our first order of business was to go out and give our feet a little dunk of Pacific Ocean. I got to say goodbye–for now–to this great body of water that has been my friend and teacher for the last decade-plus. 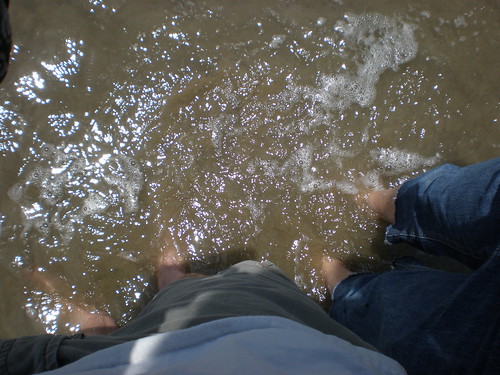 Now I have to go make friends with the Atlantic.

There was then a nice glut of LA traffic getting out of town (who are you people and where were you going at 2pm on a Wednesday?) but we finally got out into the pretty and the desert, through Mojave and Joshua trees, past purple mountains magesty (fo’ reals) and into the pretty desert. We were greeted at the Nevada border with, classically, a glut of tacky, blingy casinos and ads for things happening down the road. 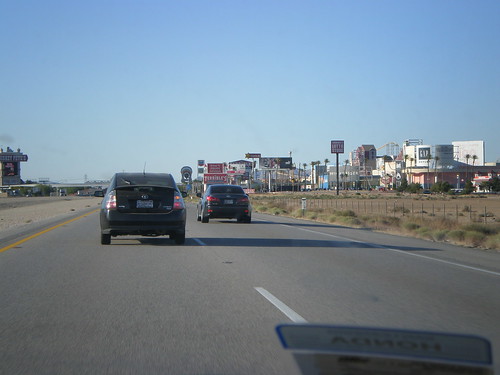 We stayed over in Vegas, because neither I nor my sweetie had ever been, and hey, you gotta see it once, right? Well, no. But he wanted to go, so I consented. It is every bit as blinky and shiny and gaudy as I imagined, and not in a way that I, personally, enjoy. It was kind of like Eilat on steroids, but without the reason you go to Eilat (ie the sea.) Sure, the interior of some of the casinos are kind of hilarious in their decadent outrageousness, but I confess that I don’t really get the point of it all. Anyway, my sweetie and I wandered around for a bit, but we got pretty bored of sin city pretty quickly. What can I say? I prefer mitzvot.

Today will include the Hoover Dam, a weird museum my sweetie wants to check out, and on to the Grand Canyon. This is so the American trip.

More next time we have a few minutes’ wifi access, and hopefully crankiness of photo editing figured out by then….

ETA: Having about 30% success uploading photos. Better luck next time, but at least there are a couple up now.