So this past Shabbat I got to get out of town, which was nice. I’d never been to Masada, so we went down early Friday, took the cable car up (the Shabbos clock was ticking, after all) and had a nice few hours tromping around and looking at all of the history. I was expecting it to have icky vibes because of the, say, mass-suicide that happened there–but I didn’t experience anything of the sort. Maybe because there are too many layers of history going on? Maybe because the deaths of the rebel forces were more complicated than, eg, the vicious murders on the gladiator field? Maybe because my feelers are highly inconsistient and subjective? Who knows? Anyway, it really was cool, and worthwhile to see.

ETA: Here’s an article by the formidable Dr. Shaye Cohen on Josephus’ account as contrasted with the actual historical evidence. Looks like Kol Ra’ash is right, that the mass suicide thing doesn’t necessarily jibe with the evidence on the ground.

Here, you can see the ramp that the Romans built to get up there. And that diamond-shaped thing at the bottom of the pic is one of the Roman camps–or what’s left of it, anyway. 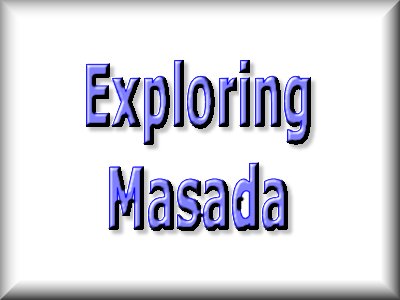 There’s a youth hostel at the base of Masada that I heartily recommend–it’s one of those International Youth Hostels, but one of the nicest I’ve seen, and they were fully kosher and shomer Shabbat friendly–they had dinner Friday night, allowed people to check out late if they were religious, everything. And dinner wasn’t, you know, gourmet, but it wasn’t terrible either.

Shabbos day I took myself on a leisurely hike on the snake path up the plateau (it’s 40 mins or so if you do it at a brisk pace, which I didn’t), stopping frequently just to gaze out at the desert and Dead Sea, the gorgeousness of the location, and my increasing elevation. Yum. It had been supposed to rain, but it was just overcast–perfect weather for the desert in winter. Just the thing to clear out a brain that’s had too much time in the city.

On the way down, I spied a whole herd of ibexes (yaelim!) going out to graze–there were like 15 or 20 of ’em. They were still there when I made it to the bottom, so I got to hang out and coo and make goo-goo noises at them for a while as they chomped away at the greenery and the orange peels that the very nice man selling fresh squeezed juice right by their grazing area was throwing their way. They were amazing! They’re like goats, but prettier and more elegant looking (and I’m a fan of the goat, so this is saying something.) And there were a bunch of teeny babies, I was beside myself with the cute.

It was Shabbat, so I hadn’t brought a camera. But this, generally, is what you missed: